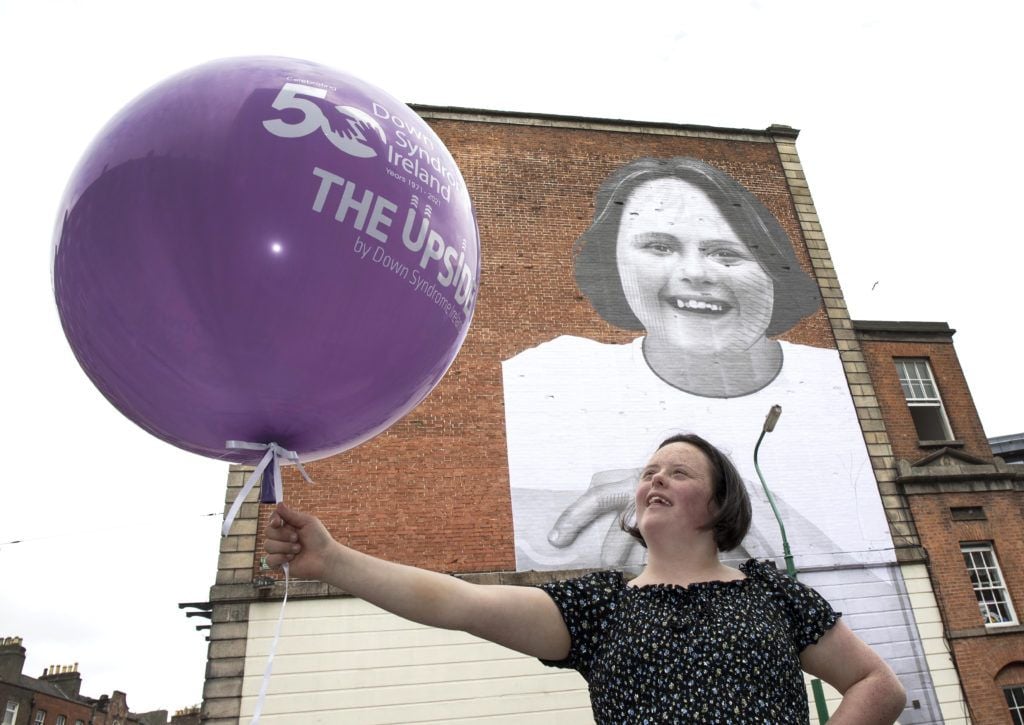 Down Syndrome Ireland marked its 50th anniversary on Monday with the unveiling of a 60-foot mural in Dublin city centre.

The artwork on the gable end of a building at the junction of Harcourt Street and Clonmel Street, created by artist and activist Joe Caslin, features 21-year-old Amanda Butler from Mullingar.

Entitled Don’t Talk Down To Me, the artwork took some 12 hours to place on the wall.

“The artwork is Amanda looking down on the world and she is asking you to consider her place within a community, a workplace, and the healthcare setting,” Mr Caslin said.

“I first met Amanda a year ago – the idea I get to work with a friend, there is an honesty in that. I haven’t come along and put someone on a wall I don’t know.

“The artwork is Amanda looking down on the world and she is asking you to consider her place within a community, a workplace, and the healthcare setting,” Mr Caslin said. Photo: PA Images.

“It’s a friendship and it’s lovely and I am really proud.

“I feel like I am only the middle-man, it’s about Amanda and those with Down Syndrome and what they can bring to your world if you allow that positivity in.

Ms Butler lives with her family on a farm in Mullingar, enjoys cooking, is an excellent swimmer and loves music – particularly Westlife and Bruce Springsteen.

She is currently working on developing job skills through her college and hopes to find work in a hospitality, retail or helping to take care of others in childcare or adult day care service.

“I am so excited to be part of Down Syndrome Ireland’s anniversary. I am grateful I have been given the chance to shine,” she said.

The artwork is part of a wider programme of activities as part of the charity’s new campaign, The Upside, with a new report on public attitudes also launched to highlight how the reality of life for people with Down Syndrome and their families often falls short of many people’s aspirations.

Barry Sheridan, chief executive of Down Syndrome Ireland, said: “We want to celebrate how far we have come over the last 50 years, but we want to use the opportunity to present the difficulties and challenges that people with Down Syndrome in this country still face.

“We hope the artwork shows the positivity and vibrancy in terms of what people with Down Syndrome can bring to society.

Mr Sheridan said there is much more Ireland can do to ensure it is an inclusive society, and that people with Down Syndrome face difficulties throughout their life.

“It’s right across life cycle from early years through education and employment and health complications,” he added.

“Fifty years ago, people with Down Syndrome were often forgotten about and hidden away, so we have progressed in society, but are we really truly inclusive?

“We have children waiting four years for hospital appointments, we are really under resourced for services in this country.

Fifty years ago, people with Down Syndrome were often forgotten about and hidden away, so we have progressed in society, but are we really truly inclusive?

“Families have to raise money to try and get the type of therapies that should be provided by the state.”

The data from the survey of public attitudes conducted by Empathy Research found there is strong public support for higher education access for people with Down syndrome, with 87 per cent of adults agreeing there should be supports to engage in further and higher education.

However, before the pandemic, just 29 per cent of adults with Down syndrome were undertaking some kind of course, many of which were delivered in a health setting by care staff.

“We need to change this. In the past five years, Down Syndrome Ireland has submitted over 20 submissions to a wide and varied range of Government consultations. We have participated in numerous pilot programmes, but significant gaps to inclusion remain. The time for discussion has passed. Now it is time for action,” Mr Sheridan said.