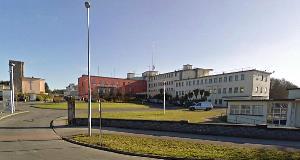 The long-awaited delivery of modular units for a 60-bed ward block at University Hospital Limerick (UHL) has commenced.

The €19.5 million project is a temporary measure aimed at helping to address a lack of bed capacity in the Mid West region by tackling the ongoing trolley crisis at UHL.

The modular units were delivered on a site on the grounds of the Limerick hospital as 80 patients languished on trolleys.

UHL is consistently the most overcrowded hospital in the country as it does not have enough bed capacity to deal with demand, management has acknowledged.

In 2009, the then Fianna Fáil/Green coalition government implemented a plan reconfiguring all 24-hour Accident & Emergency units in Clare, Tipperary and Limerick into one 24-hour Emergency Department (ED) at UHL.

A permanent 96-bed unit has also been sought by management to help alleviate overcrowding pressures on the emergency department and wards.

A spokesperson for UL Hospitals Group and HSE Estates said the 60-bed block project “is on schedule and the beds will be open before the end of 2020”.

The modular units were being delivered by a fleet of 40-foot articulated lorries.

“The modular units for hospital ward levels 1 to 3 have been prefabricated offsite and are being parked up in an area within a few miles of the hospital awaiting delivery. A mobile crane is being used to install the units on arrival at the site,” the spokesman said.

“Installation of these units is due to be complete by end of this month and the concrete floor screeds, internal fit-out, mechanical and electrical installation etc will then commence. The modules sit on the pre-cast basement roof which has already been constructed by traditional build.

Colette Cowan, CEO, UL Hospitals Group, described the delivery of the modular units as “another milestone” for the hospital.

“We expect the beds will be available for patients before the end of this year after all the equipment has been installed and tested and all the staff recruited and trained,” Ms Cowan added.

A spokesman added that UL Hospitals Group is “currently finalising the details of a specific recruitment campaign for the approximately 140 whole-time equivalent staff required for this significant expansion of UHL’s bed capacity”.

“This project will help considerably in reducing the long wait times experienced by too many of our patients, especially in our Emergency Department,” said Ms Cowan.

Meanwhile, the organisers of a march highlighting patient overcrowding in UHL, which saw thousands take to the streets of Limerick city last Saturday, said they will now “focus on forging alliances with other such groups across Ireland, building towards a mass national demonstration”.