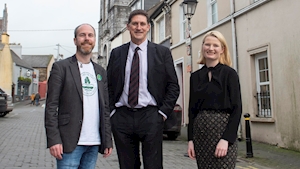 The Green Party is targeting 15 seats in this weekend’s general election.

Party leader Éamon Ryan said they will speak to any party about a coalition – but only if the climate crisis is on the agenda.

Mr Ryan is “quietly confident” undecided voters will “break green” in the coming days ahead of the vote and the party may even exceed its target of 15 seats.

He said it is “vital” the party picks up seats outside Dublin but said he is confident the team they have selected will do so.

The Business Post/Red C poll issued over the weekend shows the Greens tracking around 7%, down from 8% in a previous poll but Mr Ryan is confident they could do even better this weekend.

“That change of consciousness that we saw in the local and European elections is not going away,” he said.

“We got an average of about 5.5% in the local elections where we were running and that is around 8 or 9% now so, actually, it’s improving.

This includes Cork-specific policies like carrying out an immediate review of the flood protection schemes planned for Cork city, supporting the development of light rail in Cork and holding a citizens assembly on local government arrangements in the city.

The Greens took a swipe at the other parties for simply “paying lip-service” to climate policy but said they will negotiate with anyone when it comes to forming government once climate change is high on the agenda.

Meanwhile, Mr Ryan reiterated his stance on the Cork-Limerick motorway. He has previously said it would “make no sense” and that the money would be better spent on investing in the rail network between the two cities.

He said it is important to “look at all the options”.

“There are four options on the table and three of them are on a different route,” he said.

“What I would like to see is if that alternative is a better option and saves significant money, then that money needs to go into Cork public transport and Limerick public transport and advance the Luas, the cycle lanes and the new railway stations which would really improve and address the transport crisis this city is in.”