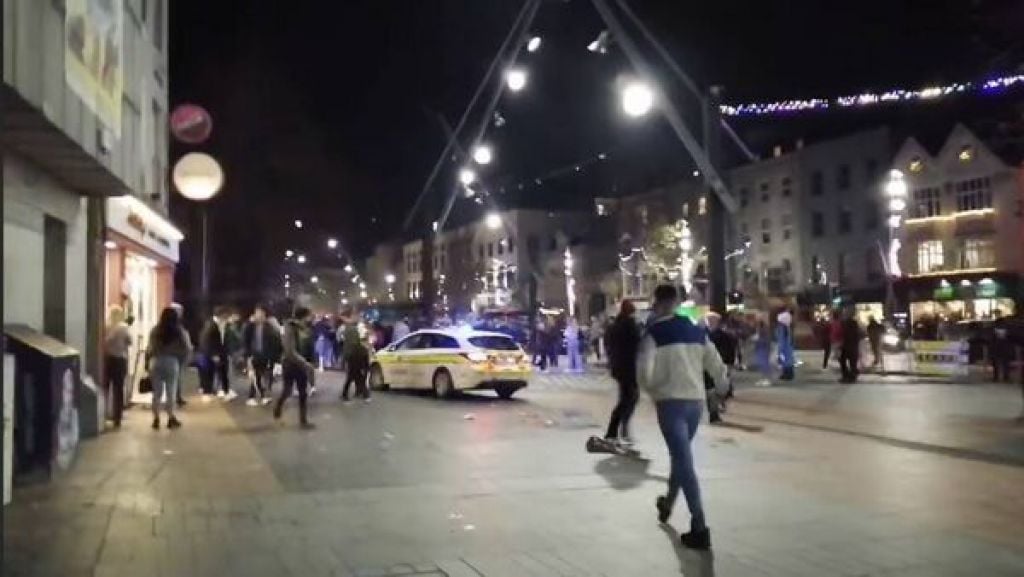 Gardaí made a number of arrests for public order offences in Cork city on Saturday night as part of increased patrols for compliance with Covid-19 restrictions.

Large numbers gathered in the city centre in what one garda described as “a carnival atmosphere”.

Footage of the crowds was shot by charity worker Ali Hamou.

Mr Hamou, who volunteers with the One Human Community charity which conducts soup runs at weekends, said he filmed the area at 8pm.

It shows people, many without masks, milling around Grand Parade and some skateboarding. At one point a Garda car appears.

Mr Hamou said it was a similar story last weekend in the city.

“We will never get out of this lockdown if we keep doing this,” he told The Irish Examiner.

Mr Hamou said he appreciated many people out on the streets were young, but he added that many appeared to be drunk and were not wearing masks or practising social distancing.

What is captured in the footage was corroborated by a Garda source familiar with activity in the city centre this weekend, who told The Irish Examiner there was a “carnival atmosphere” driven by takeaway alcohol.

This placed officers in a difficult position due to the sheer number of people on the streets, the Garda source said.

The garda said people were congregating outside pubs serving takeaway alcohol, and that the recent turning on of the Christmas lights had proved an added attraction.

It is understood large groups of people gathered in a number of city centre spots.

Gardaí said there had been no major incidents and most people were compliant when asked to move on, but that policing such a situation presented major difficulties for staff on the ground.

Speaking in response to the events on Saturday evening, Labour Cllr John Maher and Labour local area representative Peter Horgan called for the Garda Commissioner to come to Cork this week and address resourcing issues for front line gardaí.