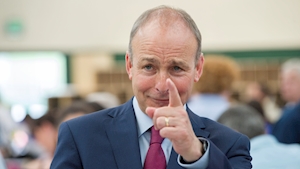 Fianna Fáil leader Micheál Martin has not ruled out a “grand coalition” with Fine Gael as various parties engage in talks to form the next government.

Speaking this evening, Mr Martin said he would speak to Fine Gael as well as to the Greens, Social Democrats and Labour in a bid to form a government.

Earlier today he ruled out engaging in such talks with Sinn Féin.

Speaking to RTÉ’s Six One, he said: “We’ll reach out to Fine Gael” but he said the task of government formation was difficult and he did not rule out another general election.

He said that no matter the shape of the next government, housing, climate change and health were the “key issues” around which a programme for government would have to be built.

“Any government has to be sustainable and has to be able to deliver its promises on a sound platform.

“I believe the country and its people need a government that can radically change.

“It’s not about parties, it is about convincing people that we can make a difference in their lives,” he said.

He said housing would have to be dealt with “as an emergency” in any government policy document.

He added that in speaking to members of Fianna Fáil over recent days, people “overwhelmingly” felt that Sinn Féin’s economic platform was “irreconcilable” with Fianna Fáil’s.

Asked whether any member of Fianna Fáil had asked him to step aside as party leader, Mr Martin said they had not.