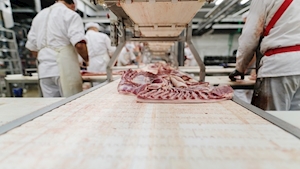 Two thirds of migrants working in meat plants that have experienced outbreaks of Covid-19 do not believe their employer has done enough to protect them from the virus, a Dáil committee has heard.

The spread of coronavirus at meat plants is under scrutiny at today’s Oireachtas special committee on the Covid-19 response.

According to research by the Migrants Rights Centre of Ireland, a large number of people working on the factory floors of meat plants are foreign nationals.

Brid McKeown, project manager at the centre, told the committee that migrant workers employed at meat plants had concerns about their own safety.

“43% of the respondents said that even when [safety] measures were in place, they felt employers were not enforcing them sufficiently,” she said.

“Of the workplaces where there were clusters [of Covid-19], just 30% of workers felt their employer had taken effective action to make them feel safe, with 67% saying their employer had not done enough to prioritise their safety.”

Earlier today, trade union representatives from Siptu said TDs and Senators had insulted more than 6,000 meatpacking workers by failing to ask their union to give evidence at the committee today.

Greg Ennis, divisional organiser for Siptu, said the number of workers who tested positive for the disease is a “scandal”.

“We’re outraged, to put it mildly. We have been raising these issues consistently since March,” he said.

“We’ve consistently sought mandatory temperature testing and we’ve written to the HSE about their [previous] admission to the Oireachtas Covid-19 committee that they hadn’t, at that point, carried out inspections of meat plants – which we found incredible.

“You have a situation where there are 1,056 workers who have been confirmed Covid-19 cases out of a workforce of 15,000 across the Irish meatpacking industry – that’s a scandal in itself,” Mr Ennis said.