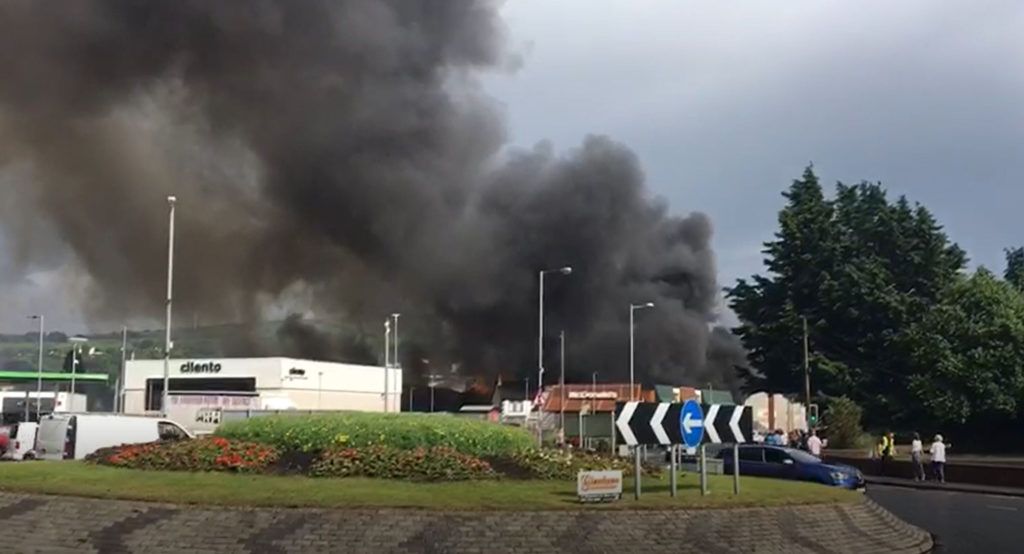 An investigation is under way to determine whether a blaze that broke out at a business in Strabane, Co Tyrone was caused by lightning.

It comes as a clean-up continues after flash floods hit the north coast on Sunday, causing disruption which affected a number of homes and businesses.

The promenade in Portstewart, Co Derry was closed to traffic after heavy rain caused cracks to appear in the road. A police spokesman said the road may remain closed for most of this week.

The Western Trust said part of the waiting area in the emergency department at Altnagelvin Hospital in Derry city had to be closed due to the flooding.

Firefighters were still at the scene of the blaze at O’Doherty’s, a coffinmakers on Railway Street in Strabane, on Monday.

At the height of the blaze about 80 firefighters, 10 pumping appliances and four specialist vehicles were there.

People reported that the blaze began after a thunder and lightning storm in the town.

Fire service district commander Andy Russell told the BBC: “Though we will have to wait until we can conclude that investigation, that will be one of the lines of investigation.”

A Northern Ireland Fire and Rescue Service spokesman confirmed that one appliance was still at the scene on Monday and that the road remained closed.

Meanwhile, the mayor of Causeway Coast and Glens, Richard Holmes, said traders in Portstewart are hoping the promenade will soon reopen to traffic after Sunday’s torrential rain.

“When the water receded you could see a number of cracks had opened up in the road, and the police were on site to close off the section of the road and got the cars off the promenade, and closed the shops on that section of the road.

“NI Water have worked through the night to make sure there is no structural damage. The next thing is to pare back the tarmac and see what damage there is. The pavement has reopened and the shops are open but the road remains closed.”

Mr Holmes added: “Portstewart was full at the time, people were running to try and get into their cars.

“Everyone understands the urgency to get this road reopened, it is peak trading season, holidays have started, the north coast is packed. The traders are looking forward to a bumper few weeks.”

Major fire in Tyrone after coffin makers ‘hit by l…

A PSNI spokeswoman said: “Roadworks are ongoing on Portstewart promenade due to structural damage caused by adverse weather.

“Please be advised that the road is expected to reopen by Friday.”