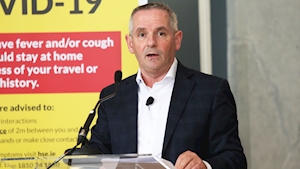 The chief of the Health Service Executive (HSE) Paul Reid has said that 19,5000 Covid-19 tests were carried out on Thursday in a new daily record.

Mr Reid told Newstalk Breakfast that the numbers in the past week had been shocking, adding the public needed to take a look at those figures and to act appropriately.

The figures come as the HSE has a capacity for 100,000 tests a week, with additional “surge” capacity in place at a German lab.

“If anybody’s looking at the trends and the numbers coming through right now, it’s quite serious,” Mr Reid said.

“That’s the volume we’re at, the trend we’re seeing and that’s the concern – people need to now take a radical look at everything we’re doing. I really mean it.”

The positivity rate of tests carried out over the last seven days is now more than 4 per cent.

Mr Reid urged the public not to meet people they did not need to meet and to avoid having others visit their homes over the next few weeks.

No matter that the Government or Nphet did, the biggest impact on figures would be public behaviour, “what people do,” he said.

“We’re all on the same page that our hospital service is challenged, and we’re watching it very closely on a daily basis – and want to keep all of the other services going.”

There was not any disagreement between the health service and Nphet, he said. They were all equally concerned about the impact of a full lockdown.

Mr Reid said there are currently around 41 ICU fully-manned beds available in the health care system.

While there was capacity to scale up if needed, that would mean stopping some other health services, he added.

“We don’t want to get near to those levels,” he said.