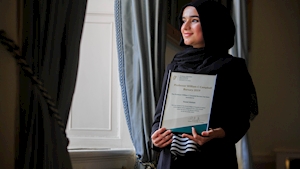 An 18-year-old student from the Royal College of Surgeons (RCSI) was personally named in the President of the EU Commission’s State of the Union address yesterday.

Commission President Ursula von der Leyen mentioned Suaad Alshleh when speaking about the need to harness the skills, energy and talent of refugees in building a future for the EU, according to The Irish Times.

Suaad and her parents fled from Syria in 2011, arriving in Ireland in August 2016 having spent time in the United Arab Emirates.

Suaad told The Irish Times that she heard about Ms von der Leyen’s mention after receiving an email from the RCSI with a link to the speech.

In her address, Ms von der Leyen said: “I think of Suaad, the teenage Syrian refugee who arrived in Europe dreaming of being a doctor.

“Within three years she was awarded a prestigious scholarship from the Royal College of Surgeons in Ireland.”

Ms Alshleh said she could not believe what she was hearing, but showed her parents, both engineers, who were “over the moon”.

“I feel incredibly honoured and so happy and grateful to be able to represent RCSI, Ireland and Syria in this light,” said the 18-year-old.

“While I’m glad my hard work and dedication came to fruition, many other refugees haven’t been embraced and afforded the opportunities I have.”

After arriving in Ireland, Suaad and her family lived in a Direct Provision Centre in Co. Monaghan for nine months before receiving their papers and being relocated to Portlaoise, Co Laois.

The scholarship allowed her to claim her place in the RCSI in Dublin, where she is now due to begin her second year.

Prof Cathal Kelly, the RCSI’s chief executive and registrar, said the Covid-19 crisis was transforming the delivery of healthcare and now, more than ever, talented young people were needed.

“Suaad is an extraordinary role model for aspiring doctors across the world and we were delighted that President von der Leyen chose to acknowledge her achievements in such a high profile way,” he said.