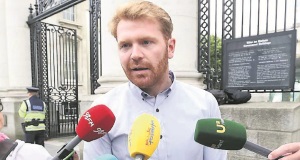 Gary Gannon says Fine Gael, Fianna Fail and The Greens should get on with forming a government.

The recently elected Social Democrat TD for Dublin Central says he has no interest in propping up the two major parties, but he gave Eamon Ryan his number two vote on his ballot to do so.

“The Green Party mandate is very different to mine,” he said.

“I gave the Greens my number two, because I fully expect them to be around the table making decisions.

“The Greens campaigned on this idea that the world is on fire and we don’t have time to wait.

“I know there’s a bit of an identity crisis going on in the Greens at the moment, but their mandate wasn’t an economic one.

“I fully expected them to be around the table trying to influence or mitigate the environmentally negative policies of Fianna Fail and Fine Gael.

“I would rather have Eamon Ryan around that table than some of the more rural independents that wouldn’t have the same environmental considerations.

“My mandate is to achieve a social democratic economy and I don’t think we can achieve that with Fianna Fail and Fine Gael.”

The former independent councillor joined the Social Democrats in 2015, and includes many previous Labour TDs as his political influences, but stopped short of ever joining the party.

“Not to be overly critical, but Labour has abandoned the idea of Keynesian economics, which should underpin the Labour Party, which is about state intervention,” he said.

“In 2011 I’d been working in a community centre, and I’d watch young people who previously have been getting payments for long periods that had been stripped away.

“The bereavement grants – taken away.

“For me, that concept of the Labour Party has been lost in the actions that were being displayed by the party at that time.

“So, that is definitely why I still can’t ever even consider that as an option.”

Although he says he believes in cross party cooperation and a strong opposition, he does not believe a national government, floated by Eamon Ryan, would help Ireland in the current crisis.

“The very last thing we need is some social science experiment where we think that Micheal Martin and Mary Lou McDonald and people who have different opinions are going to be able to walk into a room and coordinate and make decisions,” he said.

“What we really need is an effective government that have the numbers, and a constructive opposition, who are willing to work alongside the government.

“I think in our approach to Sláintecare where Roisin Shorthall chaired an all party committee on the future of health in this country and came back with this incredible document, and how we approached Brexit, I think they are the templates for how we approach the emergency that is COVID19.

“A unity government, which we don’t know how long would even last, the Greens are talking about doing this for three months, there’s no guarantee that this emergency would be resolved by then.

“There’s no guarantee it’ll be resolved in six months.

“We want to present alternatives, to be able to stand in front of the electorate when decisions have been taken by the government that we disagree with, we want to hold up our plans and say; ‘This is what we would have done differently’.

“That’s an invaluable part of democracy.”

Mr Gannon has now run in four elections, and came to prominence in the last two years when he campaigned for a seat in the European Parliament last May.

He reveals he considered leaving the party during at the time over an interval row over his friend, and local election candidate for the Social Democrats, Ellie Kisyombe.

Miss Kisyombe, originally from Malawi, was alleged to have misstated how she eventually arrived in Ireland, which started a disagreement within the party on whether or not she should remain a candidate in the election.

“I think at the time those thoughts (leaving the party) did actually go through my head,” he said.

“It was a tough time, it was even tougher because we were in the middle of a local election.

“People were running all over the country, and you’ve put so much into it.

“But I think the Social Democrats can be very proud that we got back together and found unity and built towards what was a really successful general election.

“There’s no animosity at all, we’re all pulling in the same direction, we’re all very close in terms of how we engage and the level of trust in each other.

“What we demonstrated is that you can have fundamental disagreements, but once it’s over keep building for the future.”